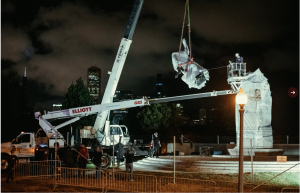 DROWN OUT THE PIG NOISE!

Report back and reflections on the Counter-Rally of the Back the Blue at the Ex Monument in Chicago, July 25th

At the now ex-columbus statue on Saturday, July 25th, there was the triple threat of CPD, DHS and the bootlicking blue lives matter trump supporters at a Back the Blue rally. This was a highly anticipated shitshow all the way around. Their event was organized to show support for a demoralized CPD after they got routed by water bottles and fireworks the previous week at a massive rally organized for Black and Indigenous Solidarity, where protesters almost took down the racist statue. The police then retaliated with a serious escalation of violence with teargas and batons, seriously injuring hundreds of protesters. Then, the pig union boss of the FOP John Catanzara wrote a letter to Trump to request help “restoring civility” in a city “turned to chaos”. Trump said he would oblige of course, which meant that could potentially turn into a Portland or Seattle situation, where secret police had been brutalizing and kidnapping protesters in unmarked vans in a truly vicious and unprecedented way. THEN, on Thursday, when the mayor ordered two columbus statues to be taken down, Catanzara and a group of pissed off drunk plainclothes cops gathered at the lakefront statue and hassled a small crowd of people who came to see the racist statue get taken down.

Ok, about saturday –  These pig-loving blue life fascists pretty much invaded the entire south end of Grant Park with a racist mob of mostly white suburbanites who came to wave their stupid flags downtown and hassle anyone they perceived to be in opposition to them. Naturally there should have been an organized counter rally, but unfortunately the organizations Tikkun Chai and Chicago Activist Coalition took up the torch. They never should never have. Through their divisive nonviolent rhetoric, they actively discouraged a counterprotest and became hostile to people on their event page, and in moving the location of their protest halfway through the week, in many eyes, they abandoned the safety of many people who may have intended on protesting the fascist event at the actual location. Tikkun Chai and CAC were right to warn people it would be dangerous, but failed to coordinate and ensure people’s safety in the park that day. CHI RESISTS even discouraged people from going to their rally for this reason.

But more fuckery: people who were talking about the need for self defense in regards to the blue lifers on the event page were labeled as agitators, and Tikkun Chai even doxxed a comrade and posted their picture. This endangered a genuine comrade in a number of ways obvious to any real organizers who would never do this. They also posted that they would search people’s bags as they entered their protest. This had a chilling effect which really hurt the numbers at their rally. There was a vacuum left by the bankruptcy of non-violence which endangered ALL the protesters who would be in the park that day.

This is why an autonomous block showed up to act as a SHIELD WALL to support protesters who wanted their voices heard at a place everyone knew would be dangerous. We went to the ex-monument to defend Black Lives and to show NO FEAR against the ever increasing rise of fascism in this country. Even though Tikkun Chai and CAC changed the location, we knew there would be stragglers and wandering Black Lives Matter protesters who would inevitably wander to check out the commotion at the ex-monument where the Blue Lifers made their hill. We knew that there was a possibility of violence on protesters, as we have been carefully monitoring the dialogue on all of the Back the Blue forums where they have been talking about bringing bats and guns to handle Antifa.

An anti-cop counter-rally noise demo was also announced the morning of the event and was spread through signal threads and word of mouth. Despite police trying to block them off at every entrance to the area, they made it to a nice spot amongst the trees on the opposite side of the street, where they surprised and honestly scared the shit out of the blue lifers with a barrage of LOUD SICK beats made with only a handful of pots, pans and cowbells. When the band started banging, fellow counter-protesters on bike and foot came out of the woodworks and together we became an effective line of resistance against the maybe 150 or so blue lifers and their legion of riotpigs on the street that day. Their rally was pretty much ruined for the last half, many of their supporters were agitated and disturbed, their speakers had to strain their voices and genuinely could not be heard over the sounds of the counterrally. Rumor has it their scheduled singer couldn’t perform either! Their rally ended around 4 with a police escort down Roosevelt to the train station and to where the racists parked south of the park. We heckled them their way out “NAZIS GO HOME” and of course “NO COPS NO KKK NO FASCIST USA”

But we knew there would be plenty of aggressive blue lives stragglers who would want to cause trouble after their rally, so we stuck around and chased the racists out of the park in a few confrontations and near scuffles. We basically made sure that no fucking trumpies walked up the park to hassle the Anti-Ice protest organized by Humboldt Park Anti-Gentrification Group and even the Tikkun Chai / CAC protest. Although the latter groups denounced self defense tactics, a presence as a show of force in the south end of Grant Park was necessary and effective in scaring the trumpies out of the park, and ultimately served to shield the protests that denounced such confrontational tactics.

Tikkun Chai / CAC pushed a harmful ‘good’ vs ‘bad’ protester dialect, which is a tired liberal trend in the movement, and for this people ought to reconsider supporting this org and instead follow the amazing Black and Indigenous leaders of the movement who fought to topple the statue last week. The takeover of the statue grounds at the Decolonize Zhigaagoong event was not a nonviolent tactic, but it was necessary one that forced the mayors’ hand to take down the statue, so if you want to celebrate that, you must celebrate the decisions people made to get militant.

We have been going hard since the uprising began. I’ve been to a number of protests organized by the CAC, just because I try to go to as many different protests as possible. We know how to listen, take cues from leaders of color, especially Black leaders. But these groups failed this day and almost fucked up a counter-rally where a nonviolence was not plausible with the real possibility of actual violence from the CPD, Feds, and the Blue Lives Matter crowd.

And shit is about the get way worse. This same weekend, Trump’s Operation Legend was in full swing with the DEA, FBI, ATF, and the U.S. Marshalls on the street ‘helping local law enforcement with various arrests, particularly gun offenses”. Also this weekend we have seen more protesters thrown into unmarked vans in New York, and feds at Alburqurque and Kansas City. These agents in Chicago assisted local police for the first time this same weekend with a number of arrests for gun/drug charges.

Although we don’t know if feds were on the street at the rally, we do know our movement is becoming increasingly more amazing and powerful all the time, and that true revolutionaries got each other’s back. Solidarity means attack!!