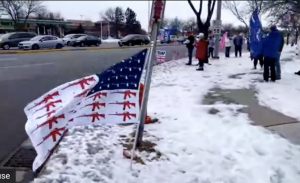 update: Schaumburg has placed a Covid Testing site at the parking lot where MAGA gathers. MAGA is still rallying including planning a big one on March 13.

Schaumburg Sundays, or Sunday Funday as the fash call it, was a weekly suburban Trump rally at the corner of Golf and Meechem that spanned from Summer of 2020 and more-or-less ended 1-17-2020. Here, the various strains of MAGA fascists gathered, Back the Blue, Militia, and Proud Boys, QANON conspiracy theorists, young republicans, and straight up nazis. All were participants in the movement that stormed the capitol on January 6th, and many regular attendees of Schaumburg Sundays were present at the capitol itself, incited to riot by Trump’s deliberate coup attempt, made clear by his rhetoric surrounding the big lie Stop the Steal. Many of these Schaumburg attendees have been core organizers in the astroturf grift of a ‘movement’ who regularly traveled to DC to join the openly fascist superspreader Stop the Steal marches on Nov 14th and Dec 12th, hyping up Trumpian brand law and order anti-immigrant, anti-BLM sentiments, screaming the election and their country was being stolen like a bunch of racist crybabies. Trump goes to trial this week in the Senate for inciting the riot, and while he may escape unscathed and without prison, many in the #ArmyforTrump are now facing years behind bars in criminal and terrorist charges for following his orders. Trump legion rightfully feels misled and betrayed by a rich bastard politician, fed lies from Fox, NewsMax and Breitbart, their wits robbed by the insidious Q conspiracy theory which took over from within the MAGA movement and spread in online right-wing echo chambers.

These now non-amalgamated scattered remnants of the attempted coup are out there, bitter, jaded, many of them having based their whole lives the last year or so on the failed MAGA revolt and now don’t know what to do. Many are disillusioned and laying low, maybe some are finally realizing that they are the baddies…. but still there are many others who feel like they never got their chance to fight and die for Trump country. Many are still dedicated to the lies and promises of their disgraced and two-time impeached leader. Sadly, some will probably take the belief that Trump won the 2020 election to their grave.

Now that Biden has been inaugurated and wields the supreme law of the land, these MAGA fvcks think they are the rebels now, they believe they are being unjustly persecuted and smeared, their free speech censored and toppled by liberal socialist fascists fact checkers in Big Tech. They complain of being labeled as criminals or terrorists, as if Trump didn’t do everything in his power to smear civil rights BLM and antifascist activists as such on day one of the George Floyd uprisings. As if the events of Jan 6th wasn’t treason or sedition, but instead Patriotism. They complain as if it is they who bear the brunt of unfair government repression. This arrogant mistaken belief is an insult to civil right movementsbhhhhhhhhhh.       and insulting mistaken belief emboldens them. They’ll continue to organize and continue to look for ways to power their racist vitriol, but next time, maybe with learned patience. Some will play the long game. Now that many got a taste of insurrection, watch them continue to get more militant and even learn and mimic organizing strategies and tactics from the left. Some may go lone wolf, some may pivot to anti-lockdown movements, some have even talked about doing charity events(sometimes misappropriating Mutual Aid).  They will fight the impeachment of Trump, they will try to #ReOccupyWallStreet, they will continue to Back the Blue, even though their movement eventually put themselves on opposing lines, squaring off with riot cops who took it easy on them in comparison to the way the pigs brutalized BLM activists all 2020. MAGA fought and killed at least one DC cop, never forget. Simply put, it is not over yet. A great deal of the players in the Capitol Hill riots have been in this game their whole lives; they are extremist opportunists, adopting whatever fash trend is in vogue at the moment. They will bide their time, so we must stay vigilant. Antifascists: watch where they scatter and hide, observe their rebranding and pivots. New grift, same shit, white supremacy.

Some have rightfully compared the January 6th Storming of the Capitol to the Beer Hall Putsch (Background and comparison laid out nicely here). This was Hitler’s failed takeover of the Weimer Republic in Germany 1923, in which 17 Nazis died and Hitler was convicted of treason. He should have been executed, but instead only did 9 months of prison, in which he used his time to write Mein Kempf and became a hero for nationalists along with the dead nazis martyred. If Germans had taken more steps to reckon with the growing toxic nationalism and hold the fascists accountable. Hitler and the Nazi’s may not have grown to commit their atrocities.

It needs to be remembered that after the Putsch, it took 10 years for Hitler to consolidate power. The lack of accountability allowed Nazism to grow and rise, it is what allowed Confederates to maintain power through Jim Crow segregationist laws and the KKK menace after the US Civil War, and what will allow the fascist MAGA masses to maintain legitimacy as the ‘Trump’ wing of the GOP, even after the failed coup attempt at Capitol Hill and beyond. Even if Trump is impeached, this is not over – the events and movement that led up to January 6th needs to be dissected, analyzed, understood and taught not for weeks or months but over the course of many years, lest we allow the next coup by more competent hands to occur. Trump may be finished, but plenty of Trumpist GOP and possible splinters are trying to carve out the various blocks that made up the 70 million GOP / Trump base. Never has an antifascist analysis been more important, especially with regards to this three-way fight understanding of the picture – we’re engaged in a conflict between the fascists and the state.

People want accountability from the Trump mob that attacked the Capitol, but not because the United States or Biden’s party are beacons of democracy, no. Biden wants a back-to-normal neoliberal hell; he wants to pour cold water all over the fires of not just the MAGA revolt but also the BLM uprising, which rattled to the core the pillars of stability in this country in regards to race and policing. Do not let the racist MAGA backlash undo everything we’ve fought for and must continue to fight for. Watch, we’ll see the tools formed by the Biden administration in response to Jan 6th used in greater degrees against movements for liberation and equity than to the MAGA fascists, who we are already facing relatively easy treatment in terms of pretrial freedoms: many capitol hill rioters spent only a single night in a copshop before being released on a misdemeanor. One got permission from a judge to go on vacation to Mexico. This is a double standard that has precedence: always it is the left and most especially Black and Brown movements that have faced the harshest and most brutal government repression.

On this note, abolitionists and antifascists don’t believe in the ‘criminal justice’ systems in which the State will use against the capitol hill rioters: sending these losers to jail goes against abolitionist principles and will possibly do more to unite them, as white supremacist beliefs are a scourge in prisons. The carceral solution is more likely to make martyrs of these fascists then teach them about civics. Rehabilitation is for the most part non-existent within cages, just a thing that wardens say that they do. We need community accountability: transformative and restorative justice, and what form this will take should be an important part of the conversation surrounding the impeachment and trials for the Jan 6th rioters. How are the brainwashed Trump masses going to unlearn all the bullshit!?

Also notable on Jan 6th was the class and racial makeup of the rioters. Of course they were mostly yt, but they were also predominantly members of the petit bourgeois,  the middle class, the business owners, the relatively affluent and definitely not at all the working class peoples suffering most under a deadly pandemic and economic crisis(more on this here, here, and here). Those without a legitimate reason to riot. Much can be said about the alienation and emptiness of life under capitalism, and the process in which racism and fascism feeds off this, and turns people in crises into violent reactionaries. People need to know how this all happened. Hopefully these are the conversations that people will be having.
. 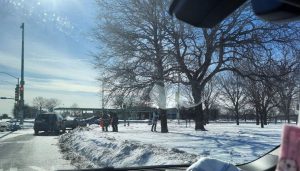 A gaggle of #TrumpZombies still show up at the corner, despite the Schaumburg Sunday being a dead scene, having been called off officially by longterm organizers for almost a month. It’s not just cold, the stench of doom lingering is palpable; the only Trumpies left are determined to go down with the stinking sinking ship.

Trump Front Liners like Jacquie Nicole had to blame Antifa for their dying movement, just like they tried to blame antifa for Jan 6th as it was happening. No threats made, only made up, they were the fake news this whole time. 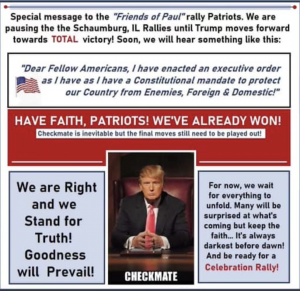 Shout-outs to the antifascists and BLM activists who showed up weekly across from the mini superspreaders at Golf and Meechem. You know who you are. You were the ones who warned the country about the menace that was brewing and boiled over as Trump’s power lingered and waned.

1-17-2020 – Schaumburg’s Last Stand
The Proud Boys made their last big push against the BLM and Antifascist protesters who show up to counter the MAGA rally and send a different message to the town. Here, escorted by pro-Trump cops, a crowd of MAGA chuds including out-of-color Proud Boys got all aggressive, and hit a comrade. This chud’s name is Guy G Alexander, of Glendale Heights, IL.

Jacqueline Nicole Varela, aggro, maskless and yelling while her sweetie Remy del Toro holds her back. 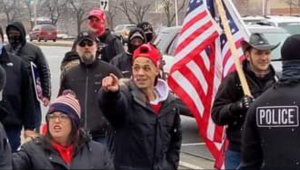 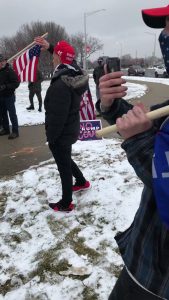 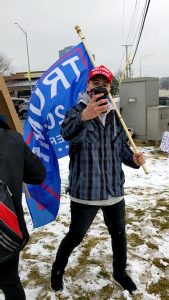 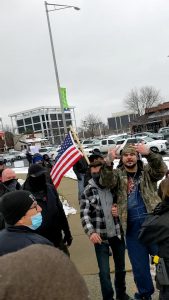 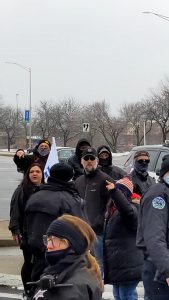 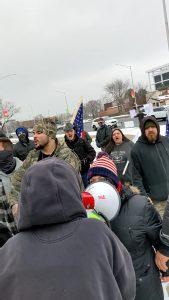 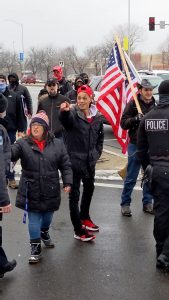 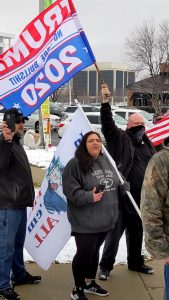 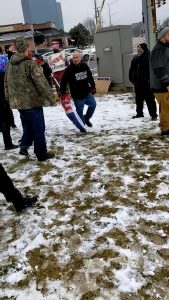 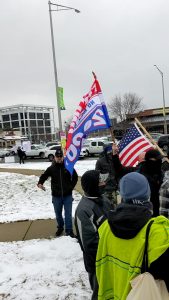 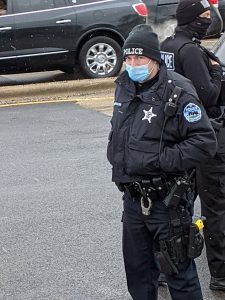 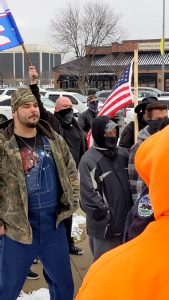 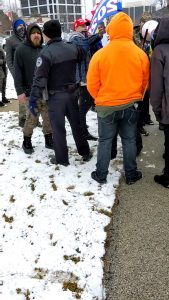 In other news, Shield Wall Chicago’s Twitter was unfortunately mass-reported into oblivion by a fascist telegram channel, along with comrades in 1312 Antifa. Happened the day before the inauguration, we hope nobody thinks we were paid operatives by the Dems LOL. 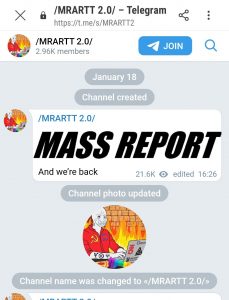 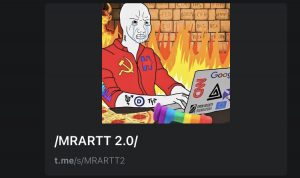 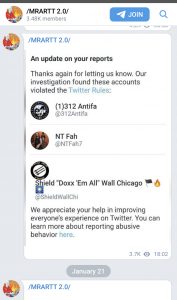 Shield Wall Chicago would also like to use this opportunity to honor the winners of our Golden Bootlickers of the Year Awards. in 2020, these MAGA losers really excelled in their respective categories. 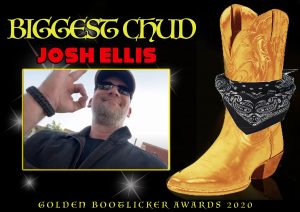 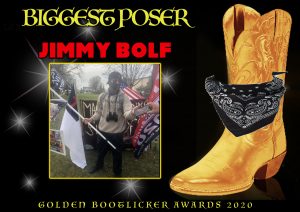 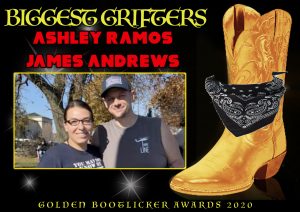 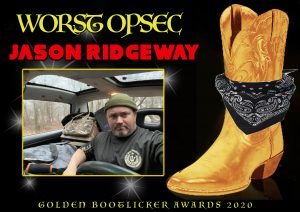 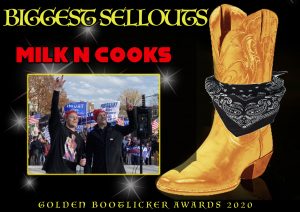 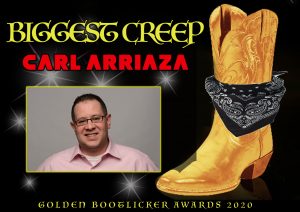 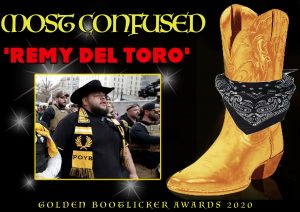 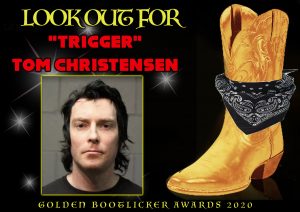